Due to historical reasons, coffee it's consumed in different ways in the European countries and also in some part inside the Spanish consumers. In Spain the approximate demand is 3.7 Kg per habitant per year, this is approximately half the demand of some other European countries. 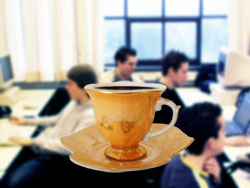 Out of this demand 60% is the natural type and 40% dry toasted. The instant coffee has around 20% of the total and from this almost half is decaffeinated. Anyway the we believe that the idea of a good coffee it's generalized and this idea says it has to be aromatic, dark in the cup and with the taste of a good coffee. The way to achieve this can't be other than to start from high quality green coffee, have them adequately processed and make a good preparation at home or at any restaurant.

The way to have a good coffee at Spain is very particular since 50% it's consumed out of home, that means, bars, cafeterias, restaurants, etc. As for the preferences for the Spanish consumer, this have unified since the launch of nation wide brand marks, however we still find differences between one region to another as for the toast term, coffee mix, percent of natural and dry toast or even the preparing method.