CLASES
The production of coffee it's located on the countries between the Cancer and Capricorn tropic, that means, countries of Central and South America, India, Indonesia, Philippines, Hawaii, and Africa.
The tree plantations are done by seed or by little trees developed. The crops are

done on a tropical tree of the Coffee family. There are many types of plants or species, but only tow have importance on our world market. 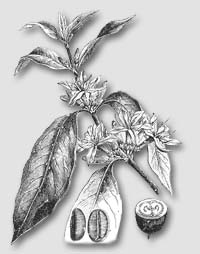 The first is "ARABIC COFFEA" and it's from Ethiopia. This plan grows on zones where altitudes between 600 and 2000 meters (1968 and 6560 feet) and requires temperatures between 15 to 25 ºC (59 to 77 ºF), plenty of light, moderate winds and frequent rains. This species represents almost the 70% of the world production.

The second one in importance it's calle "ROBUSTA". This plant is more resistant than the first one and grows at altitudes lower than 600 meters (1968 feet). The tree can reach up to seven meters high (23 feet) but normally it's prevented for it no to pass the 3 meters (9.84 feet).

The ROBUSTA variety plant is higher than the ARABIGA. The differences between the ARABIGOS and ROBUSTOS grains are noticeable, on its appearance as on it's taste that they give on each cup. The Arabigas grains have normally and greener color tone and the Robustas have a color tone between a light brown and green. The variety in each of one this two groups is huge, as on its quality as on the plantation location, whether, treatments and final preparation on the producers countries.

Generally the Central America and some African Arbigas coffee are cleaned by the a method called humid way. And the African and some Central American Robustas are tread by the dry way. Once done this treatmente the coffee are classified in each country according to grain size, defect number, and taste in the cup. By the taste it is easily differenced the Arabigas from the Robustas coffee since the first ones are soft, aromatic, and juicy; and the second ones are bitter, harsh and less aromatic.