The ways to prepare coffee on most of the countries are very different. Definitively the end is to extract the soluble part and most aromatic from the grinded, but without a doubt this extraction depends on many factors, such as: water temperature, contact time, amount of coffee per cup, volume of water used, type of coffee, and many other factors. 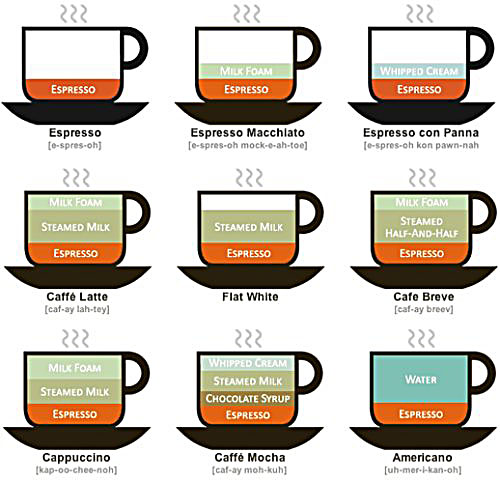 However in Spain and some Mediterranean countries have the custom of drinking coffee much more concentrated than on America and other European countries. The concentration differs normally according the coffee machine and coffee used. In our country normally the concentration it's around 1.5 to 2.5% of the cup, meanwhile in U.S.A. or England, for example, it is half. So this makes the taste of the cup to be different in each of those countries.

In Spain we have to recognize between the way to drink at home and out of it. At home it's mostly used the steam coffee machine (Italian), second the ones with filter and third a domestic express. This three coffee machines gives us very different results.

The Hotel market in Spain is close to 50% of the coffee demand. Inside this market we have to recognize between Bars, cafeterias, restaurants and hotels. It's in the first ones where normally the way to prepare coffee is the express coffee, at hotels due to peak hours, usually it's prepared on special filter coffee machines.

The EXPRESS COFFEE requires another chapter due to its importance at hotels and its particular way for preparing it. The cup of express has the characteristic of being very aromatic with lots of cream on the surface. To do this, we need to make an extraction very quickly in 20 to 30 seconds, hot water and a pressure of 8 to 10 times the atmosphere and grinded has to be very fine

In this coffee we hat to recognize two aspects: First is the appearance at the cup, that means, the cream; this normally doesn't depend on the coffee quality, but on the preparing method. The second is the fragrance, the body and taste in the cup; all these besides that the preparation depends fundamentally on the coffee quality. For this reason it's necessary to pay with a series of factors to be able to get the best result in the cup, such as: the coffee machine, the grinded, the coffee and its handling.

The express machine boned in Italy and later expanded on Europe. In Spain the coffee machines market is very atomized with a wide variety of brands and machine types. The most used are: Manual with lever, Hydraulic and Automatic with continued spreading.

The LEVER ones are the first ones and this take the water and pressure from the pot. The pressure is done by the Barman with the lever. These are very simple and some parts are still very appreciated.

The HYDRAULIC machines work automatically with some pistons that multiply the pressure until it's up to 8 to 9 atmosphere. These machines are very extended and give satisfactory results, but the inconvenient of water used per cup, it turns out to be almost a liter per cup. For last, the AUTOMATIC MACHINES OF CONTINUED SPREADING, these are very complete and today they exist with a complete automatic functionality.

To prepare a good express coffee with cream, the grinded is basic, and most times you don't get an express coffee with cream, is due to a defective grinded. Has to be taken into account the waste of the grinner is fast, around 500 Kilos of coffee and then it's necessary to replace them. The coffee dosis is regulated in the grinner and is good to test the weigh periodically. The recommended weigh according to the regions and coffee type is to 7 and 9 grams per cup. The grinded coffee must not remain at deposit more than 1 - 2 hours, since it would loose its fragrance. It's also important to frequently clean the grinner, since it accumulates the coffee oils that would give a taste of spoiled coffee.

At hotels normally it's used the filter coffee machines of great capacity. In these machines it's used a grinner similar to the domestics coffee machines. For the last years there been appearing machines of this type that have a very good result in the cup. The extraction method is through a bomb that send hot water to the coffee compartment and the extraction time is from 3 to 5 minutes for 1 o 2 liters of coffee.

Respect to coffee from hotels, it's suggested for all of them for more effort to improve thier quality of this product. If we want to get a aromatic cup with the smoothest taste we have to start from good quality green coffee. At this point we believe that that restaurants and hotels should be more demanding with the toaster, demanding a high quality coffee in a hermetic pack.